Tranquility, synonymous with Uruguay. For some, it is considered the Switzerland of America. The landscape and cultural diversity is lived through a good number of tourist sites along with activities that have caught the attention of tourists within the American continent as the rest of the world. Enjoy the best beaches in the south of the continent, and above all make the warmth of its climate in its summer seasons. It is an excellent excuse to cross the Atlantic. The figures do not lie, since every year the number of tourists attracted by these qualities have beaten their own records in crescendo. There are those who visit it very often, and that is the trend. You’re sure to be hooked on its high human quality and inspiring atmosphere. This place is definitely unique and worthy to tour. We invite you to know the most relevant in our Uruguay tourist map.

It is embedded in the southeastern part of the American continent, between two important countries in extension such as Argentina and Brazil. The Uruguayan climate is varied in terms of temperate regions. In general the rain occurs in quantity during the whole year, although the summer seasons are the attractive ones to visit its coastal zones and where the majority of festivals resound to the heat of the season, specially the carnivals, very well prepared parties and extensive duration in beneplácito of the warm and happy spirit of its people. The autumn season is special for ecological and adventure tourism, as well as the opportunity to approach its rural areas and get to know under these conditions the country life, specialized in agriculture and livestock. It has a territorial extension of 176 thousand square kilometers and in it live around 3 million inhabitants. 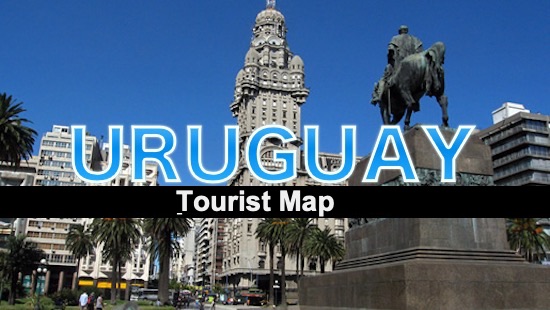 The daily life of the Uruguayan is unfolded between the good wine, the asado and the mate. Football is usually one of the central themes at the table of the Uruguayan family, and beyond that, is a sport widely practiced, not for nothing has been able to position itself among the countries power in the sport king. Its culture is unique and very acclaimed. The inspiration of the gaucho has allowed to sow in the conscious collective an excellent gastronomy based on the meat products and the derivatives of the cattle. Uruguay enjoys a provilegiada position at an international level for the quality of its grills, as well as its wines made with the Tannat vine, entered the territory a couple of centuries ago. The European and African influence on their culture has allowed them to develop a powerful cultural reservoir, UNESCO’s intangible heritage of humanity, expressed in the famous Murga and Candombe.

It is the capital and epicentre of financial and cultural activity. It is next to the majestic Río de la Plata. It is the symbol of progress and constant growth towards modernity. It has a robust urban transport system and a network of pedestrianized streets and avenues. One of the most visited urban areas is Parque Rodó. It is the main vegetal lung of this city, with more than 25 hectares of beautiful landscaped spaces. Another important green area is the Batlle Park, where the Centenario football stadium, the site of the first World Cup, is close by. Uruguay also has beautiful neighborhoods such as Carrasco and Pocitos, the latter with a beach included. Its old town stands out for its constructions in the best European style of the 19th century. Special mention should be made of the Rambla, an avenue of enormous extension where you will find beaches and spaces for beautiful walks.

Its name derives from the sandy, rocky and wooded formations.  It is one of the sites par excellence for national and international tourism. It makes it difficult to distinguish between the most outstanding characteristics of its tourism. On the one hand, this seaside resort is usually constituted between two types of beach areas, Playa Brava and Playa Mansa, just imagine the rhythm of the waves of each of them just by reading their respective names, and the tourist activities in both can be carried out. There is the possibility of contemplating the largest habitat of the continent of sea lions, in Playa Brava, using a large lighthouse as a viewpoint. On the outskirts of the city is a very special place. Known as Casapueblo, it is a curious construction that serves as both a hotel and an art museum. The most important urban corridor is Gorlero Avenue, with an interesting nightlife.

It is the opposite side of Buenos Aires, since Rio de la Plata is the border of this city. Obviously it is easily accessible by Argentines, much loved for its beauty and colonial style with. A quiet walk if you want to escape the intensity and dynamism of their cities. Its historic center is a World Heritage Site declared by UNESCO in 1995. In this city there are several galleries and art workshops that denote the importance of cultural rescue. Result of historical events, its form and architectural style led to mix the Portuguese and Spanish trends of the nineteenth century. One of the most beautiful and picturesque places worthy of photography is the street of sighs. It is a narrow avenue that has beautiful colonial houses and pavements with a combination of colors that will make you love the old and rustic of the time.

This merely fishing village offers a landscape rescued from the melancholic vision of a landscape lover of the coast. Nowadays a bohemian spirit prevails, very well taken advantage of by the youth, where nightclubs and of relaxation are crowded by them during all the times of the year. Especially during the summer seasons, the beach atmosphere is stronger with events that last all night until dawn. The naturalistic offer withdraws into adventure activities and extreme sports such as surfing, hiking and camping in lagoons, parks and beaches. You will also have the option of sport fishing and whale watching on the seabed.