Not adding Washington on your route through the United States is a big mistake; it is the political and administrative capital of this huge nation. If you think about it, you’d be missing out on the main national monuments, areas where Romanesque and classical architecture have a great impact on the eyes of the millions of tourists who fill its streets every year. Tourists that you will see, in search of art, culture, history and beauty, but that are scattered among the different museums, most of them belonging to the Smithsonian Institute. You will be familiar with many of its monolithic places thanks to the magic of the cinema. Having so many places to visit, a real museum route is ideal, for that we take care in this tourist map of Washington DC in recommending the most relevant. Take note in this trip to the “city without skyscrapers”.

The city of Washington, or District of Columbia, was created and meticulously planned to serve as the nation’s capital. It is a large city with an urban environment that concentrates all political and institutional power. Washington’s tourism reveals with its numbers the interest in the history of the United States, which has had many characters, events and feats of forging a confederation of states. So most tourism is purely urban and is spread over a vast complex of Smithsonian museums, monoliths that mark an epicentre of the power of a major nation. The White House is one of the architectural works that many are eager to see in person, or the Washington Monument that matches the Reflecting Pool. It’s easy to get there if you’re in Virginia or visiting Maryland. 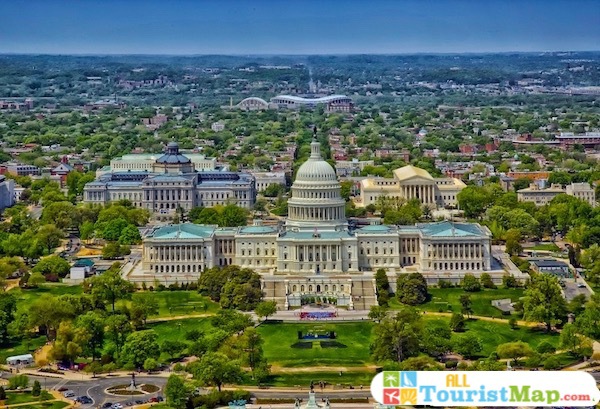 A clean and tidy city like this really does bring out the best in you. And there are so many places to visit; just think that its museums have free access, and you’ll have the opportunity to give your companions a tour of the places they only get to see in movies. Finding a sense of patriotism in their colossal statues, pillars and museum themes will make you reflect on how jealous they are of their identity. One thing you can do is take a full tour of Georgetown, perhaps the most prominent neighborhood in the city and full of curious and beautiful places. The Capitol offers tours in which you can even access its plenary hall, while receiving the impact of its architecture. Lincoln Memorial is always at the forefront of any tour, and the message the statue conveys is overwhelming. Walking between headstones from different battles in the United States is priceless at Arlington Cemetery.

To make a complete tour you must have enough time. Generally many people come to the city as a complement to a route through the United States. This Washington DC Tourist Guide would say that it is not to take the city at a gallop, since you would be missing out on many museums, beautiful works that make us proud of the ingenuity and imposing Washington spirit. Help yourself to an exhaustive selection of the most relevant places, surely in the way of our traced routes you will be able to expand places where you will have much more to see and do. And of course our helpful hotel map will help you with your ideal accommodation.

What to see in Washington DC 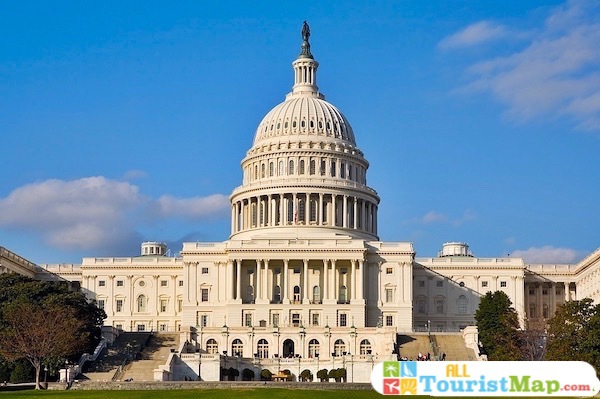 This congress hall is the icon of democracy. It is the current venue for the meetings of the Senate, the House of Representatives. As an image of classical architecture this capitol is familiar to the eye. Its enormous dome with sculpted details, having white as a representative color. In the skylines of Washington DC, this building usually stands out from the others and it is not by chance that it sits on the Capitol Hill. It shows predominance in the city allegorizing the political power of the United States. It is usually the end of two important roads, such as Pennsylvania Avenue and Maryland. Part of its interior is accessible to the public, thanks to the Visitor Center. Here you can learn about the history of Congress, as well as the construction of the Capitol. And of course you can enter but with special permission to the Senate chamber. 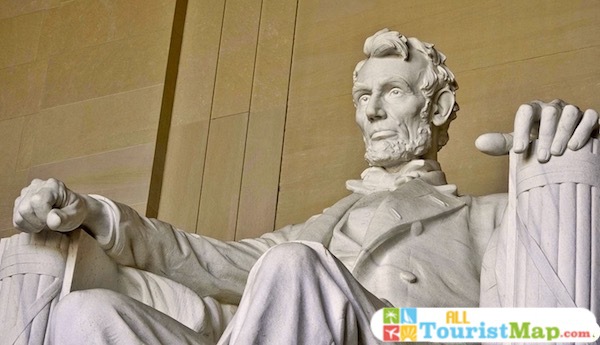 Just the size of his statue makes us see how incredible it is to feel patriotic, for this important president in the history of the United States. But it is his work and phrases that remain in the memory. They are produced in this temple erected to his life and figure. Looking at the Washington Monument, the almost 20 feet high statue of Lincoln is astonishing. The Doric art of its columns is synchronized in number with the states recognized during his mandate.  Inside, the building is separated by rooms for speeches by the president and engraving works that reflect the values promoted. This place, specifically its steps, is usually the scene of important political and civil events. It was the scene of Martin Luther King’s famous speech, in which he gave his famous “I Have a Dream” speech. 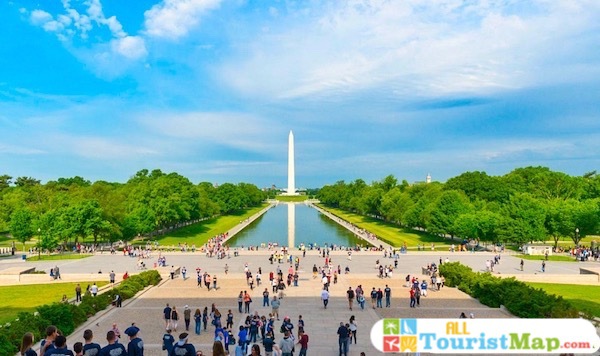 The Smithsonian museum complex, the route between the White House and the Capitol are demarcated by this great esplanade. It is also one of the main tourist attractions in the capital of the United States. In the tourist visits this area is never missing in the repertoires and guided tours. The place has much to say about the countless political and civil events that have marked the course of modern American history. If you have the opportunity to go in July, then you will have the joy of being there for one of the most important, colorful, and exciting national celebrations; the 4th of July, Independence Day. The esplanade is surrounded by about 17 important buildings to visit. But the element that gives it its monolithic character is the obelisk; neatness, dominance and relevance seen from any angle.

National Air and Space Museum of the United States 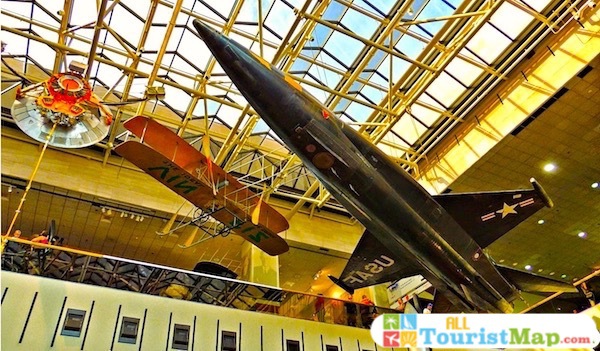 We have all dreamed of having close to us those ships that have carried man through the clouds, the stratosphere and even the moon. In this museum you will have the opportunity to appreciate those original models and replicas; means by which man has been able to fulfill the whim of defying the heights. Immersion in this museum is to awaken that inner child who seeks emotions with flight and exploration. Mechanics, history, science and exploration are concentrated in a vast collection of vehicles, maps and didactic material achieved thanks to this technology. And since the collective memory cannot fail to manifest itself, the museum gives us the opportunity to be close to the airplane that launched the first nuclear bomb. Get to know the Apollo 11 spacecraft and samples of the lunar soil, together with authentic space mission suits and meteorite fragments. 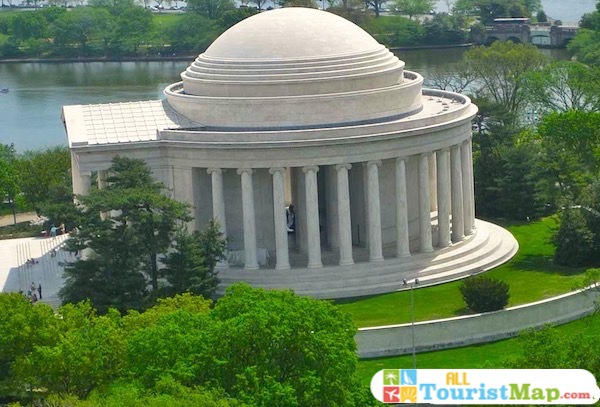 Like the Lincoln monument, this monument is of a Greek neoclassical design. It ends with a dome and the figure of the third president of the United States, closely linked to the declaration of independence. Its bronze statue, about 9 meters high, is located inside. It seems that it crosses with the glance between its columns as if it was watching the environment beyond the esplanade. The ideal landscape for a photo in this building finished in marble becomes attractive in spring time, when the cherry trees adorn the surroundings with their fruits. Since this site is far from the rest of the high schools and monuments visited, it is usually a discreet and pleasant place for an evening. We assure you that the necessary walk to get there will be worth it.

To talk about the Smithsonian Institution is to take into account this zoo, which happens to swell the list of places to visit in Washington DC. The purpose of the park is the protection and assistance of various species. The exhibition to the tourists disseminates the specimens in areas that total about 66 hectares. Hundreds of species come to life in this great urban reservoir that has been in operation since the end of the 19th century. In the enclosure, visitors have the opportunity to enjoy good food in its restaurant and to take a piece of the zoo from its souvenir shop. Keep an eye out for the repertoire of events that take place on various dates throughout the year. Among the species you will be able to observe giant pandas, crocodiles, several kinds of snakes, a wide range of amphibian mammals and insects. 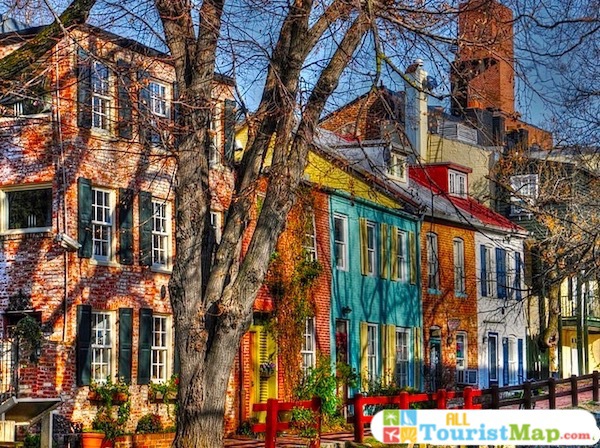 The Georgetown neighborhood has a reputation for being home to personal stories throughout history; from Thomas Jefferson to Kennedy, including some celebrities. To walk through its streets is to feel in a place that boasts the most beautiful houses that preserve the style of the 18th and 19th centuries. Many take advantage of this break to see what happens in the most select place in the city. Georgetown has no problem to show you the historical together with the modern. You can take advantage to make some purchases in the historical district. By the canal you can learn a lot about its history as you explore the antique store windows, or eat in the restaurants. The best views and moments along the Potomac River are possible at the Georgetown Waterfront, with beautiful vegetation and places to rest, cycle or kayak. 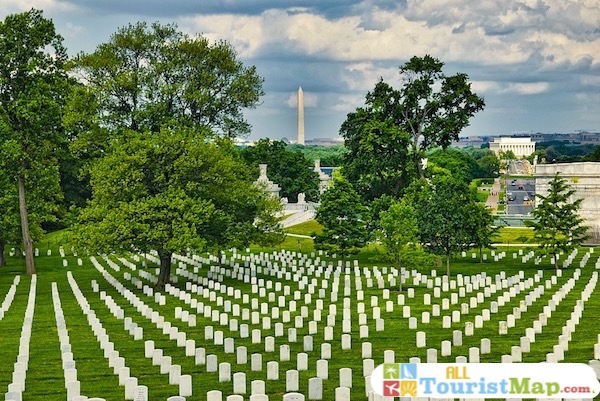 This scenario may sound familiar to you in “Saving Private Ryan.” This holy ground is one of the most famous tourist sites in the United States. Its 250 hectares are made up of a careful and synchronized location of gravestones belonging to soldiers who fell in battles of various wars during the history of the United States. Today, millions of tourists come to breathe its serene air and the noise of the trees; a great place of eternal rest for national heroes. It can be accessed from the subway station that leads directly to the Holy Field, or if you are at the Lincoln Memorial. Upon arrival you will have a map of the site, where you can choose the sections to visit. Tombs such as John F Kennedy’s or the Iwo Jima Memorial are usually the most visited. 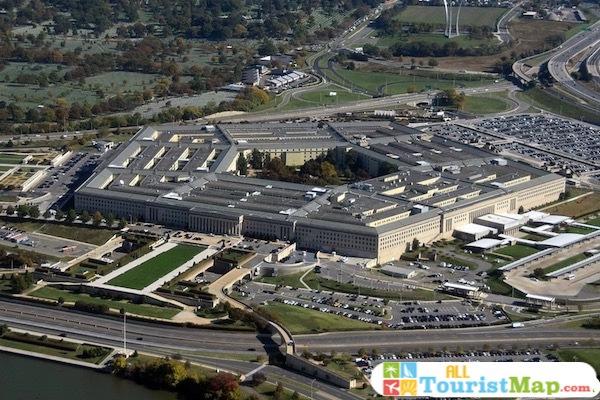 The difficult access to some of the safest buildings in the world will leave you wanting to at least get as close as possible. This military institution, the most important, most airtight and with more offices in the world. Today it gives tourism the opportunity to take a look at some of its facilities. The guides will take you to the southeast of the building, where the tour of the Hall of Heroes is done; military men who have been awarded for their gallantry in battle with the famous medal of honor. In addition, there is a shopping centre where you can go shopping or simply have lunch. It is one of the most visited places in all of Washington DC.

Map of hotels in Washington DC

As in the main capitals of the world, the most sensible option is to look for accommodation in their urban centres. The detail here is that hotels have a high cost.  Unless you are willing to pay for it, we recommend that you look for neighborhoods with good hotel offerings in the surrounding areas. The good thing is that its suburban centres have a good transport system, shops and places to have fun; in short, everything you need. Try Georgetown, Northwest or Dupton Circle. Our Washington hotel map shows you these places and many more, where the right accommodation is just a few clicks away. If you choose The Graham Washington DC Georgetown, Tapestry Collection by Hilton you will have your place by the Potomac River. The major sights will be just over a mile away.

Video of the most impressive sites in Washington DC