You can’t watch California with your eyes on the TV, you have to go yourself to visit this beautiful city of relief, excellent climate, striking and relaxed spirit, tourists like that, and the west coast of the United States gives you a taste of it. The dream of walking along its steep streets, traveling on its trams, walking along its coast and mixing among its peculiar architecture is the mission we have from this tourist map of San Francisco, to make you get everything you have in store when you step on Californian soil.  San Francisco is in everyone’s mind but few dare to live it. This is your chance to learn more about what you were meant to know, and yet it doesn’t compare to the magic that surrounds every place of interest. Continue with us on this pleasant virtual tour of the City by the Bay.

It has 700,000 inhabitants, just by taking over the city’s core of 121 square kilometers: San Francisco is a symbol of innovation since Silicon Valey is the new neighbor that infects it with new trends and is not limited to the structural. American cuisine is gaining a privileged place in this city; in this we do not exaggerate in affirming that it is the cradle of American gastronomic culture, as we conceive it. The history was related to the Spanish foundation placing this enclave in honor of Saint Francis of Assisi. It went from belonging to the Viceroyalty of New Spain to American hands after the war with Mexico. By the end of the 19th century, gold boosted the population boom, focusing attention on this location. As an additional historical fact, its strategic location helped it become an important port for the Navy fleet in the middle of the Pacific War. 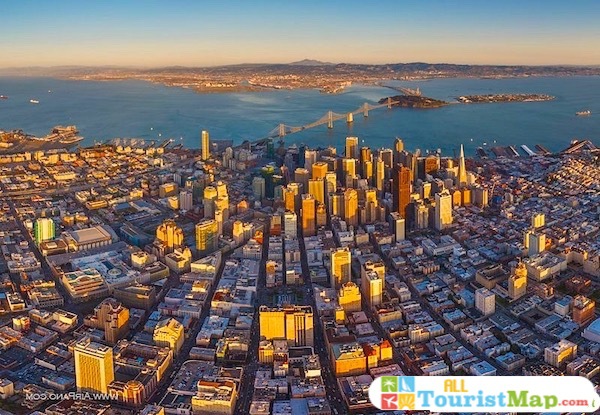 Today, besides being an enclave of technology and finance, it is also a liberal city.  It is one of the first areas to break the taboo of marijuana or homosexuality. It is ready to offer you excellent pleasant places for various tastes and accessible for all types of budgets with the desire to take a good walk. We recommend the following points as infallible destinations in your plans: the Gate Bridge whose view must satisfy and contemplate its real dimensions; the legendary Alcatraz Prison with all the secrets it has; a true Asian experience outside of Asia in Chinatown; zigzagging on Lombard Street, among other places to visit. It’s time to tell you that on the West Coast the greatest concentration of attractions is in this city. So keep our San Francisco street map handy so you don’t lose sight of our recommendations.

Surely among these sites and others you will want to have a favorite place to eat and stay. This peninsula in the state of California has many places to enjoy apart from the traditional tourist attractions. So watch out for the routes in our San Francisco guidebook. We’ll intelligently communicate the ideal places and stumble upon the ones that allow you to refresh yourself, drink, eat and of course take some souvenirs with you. Our sites, apart from leaving you the best impressions because of their themes and concepts, have prepared the best views of the city so that you can take in your memory and camera a background image that you will never forget.

What to see in San Francisco 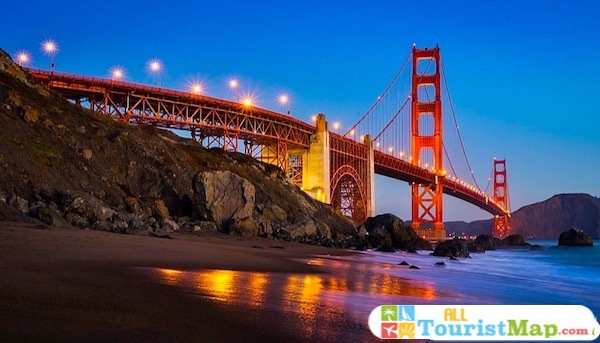 The Golden Gate Bridge links San Francisco by the strait of the same name. It is the most popular and its figure is recognizable within American culture, despite not being the largest bridge in San Francisco. Embarking on a walk or bike ride across its 2.5 miles is a national sport. Many people see more than just a metal structure as it looks on the outside. It’s a meeting point to admire the landscape with the pleasure of having done it under the perspective of this bridge, and you should have that pleasant experience. This bridge was built in the 30’s, and at the time it was the largest construction site in the city. It certainly gave an overwhelming impression of how far ahead of its time it was. Today it continues to be a source of amazement to many.

What once served as a maximum security prison for federal crime convicts is now part of the repertoire of extreme tourism in the United States. The city of San Francisco has the joy of having the appeal to make your visit a spicy one. The morbid, dense atmosphere of a dark past arouses the curiosity of millions of tourists. Come and see the facilities of this prison that has been closed for more than half a century and whose bars had interned Al Capone, one of the most famous mafiosi of history and being his cell a popular attraction of the enclosure. Pay attention to the stories of the guides who will tell you about the escape that took place in this prison. This prison is located on an island facing the San Francisco Bay. 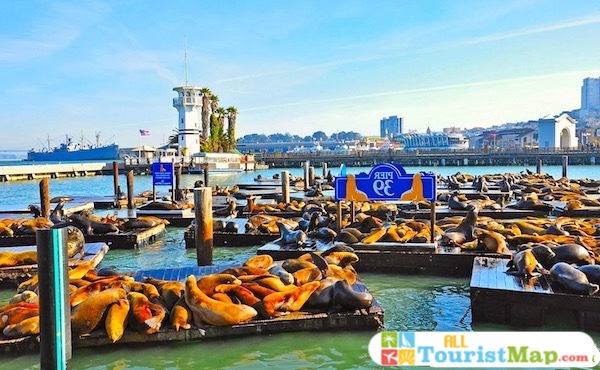 San Francisco Bay has managed to turn an old fishing port into an entertainment venue while shipping its fragrance to the sea. A place where attractions, restaurants, souvenirs and colorful facades forge the spirit of joyful California. The expression of street performers adds a lively and magical atmosphere with their witticisms that helps to capture people’s attention. There is a possibility to take a cruise around the bay and get a faithful company of beautiful coastal views. The view encompasses the fabulous Golden Gate and Alcatraz Federal Prison, while toasting with your favorite drink. It will certainly be an intimate and romantic occasion. The place everyone is talking about on this dock is the spectacle formed by sea lions that have long made this dock their favorite habitat. 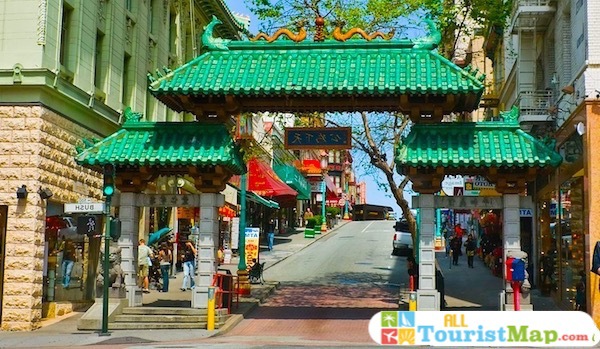 You’ve probably wondered where the biggest Chinatown in the world is, since it’s in San Francisco. It seems that the expansion of Asia throughout the Americas has this place as its epicenter; well, at least in the whole of the United States it is. The first immigrants on American soil came to the San Francisco Bay to try their luck and started taking refuge here. We can assure you that the scenery is not a product of tourism, but rather of the rooting of traditions that accidentally ended up being one of the exotic places to visit. At present it is one of the great tourist attractions of the city, due to the rich cultural offer, gastronomy and commerce. Locating it is not a problem, since the tramway center crosses it. The oriental scenarios vary by zones, Hong Kong and Taiwan are also cultures that intertwine with the Chinese one. 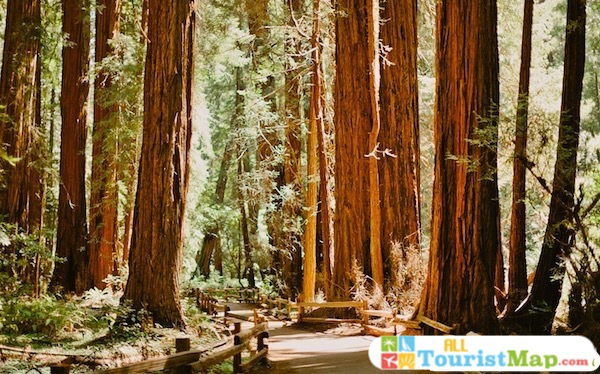 We recommend including this natural reservoir in your list, even though it is located outside of San Francisco. This place declared a national monument is a refuge for the giant sequoias that survived the indiscriminate logging of the timber industry in the 19th century. The experience in this environment will make you appreciate nature more in terms of the protection provided by its huge trees of more than 100 meters high, some of which are more than a century old. It denotes the internal landscape as serene, even when summer temperatures affect the region. This forest is ideal to take a break and commune with the green. Through its various trails, you will have the experience of visiting the Ocean View route and the Camino Dispea. Before finishing your visit don’t forget to stop by their souvenir shop; you can even buy a small Sequoya specimen. 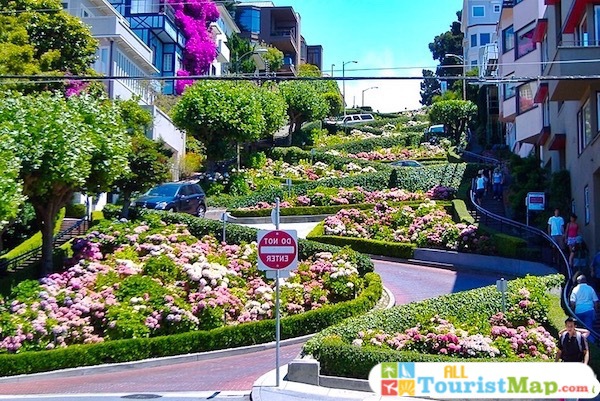 San Francisco is famous for its steep streets and its surroundings are familiar to many Hollywood movies. The Lombard Street, although not properly inclined, draws attention to its exaggerated downward curves. The ingenuity of the planners of this beautiful city has allowed this rarity in urban architecture to take an important place among the essential sites when visiting the city. The reason for the zigzagging curves is due to the various slopes of the street. Its shape forces drivers to be cautious and the inclination does not make a bad move. Visitors concentrate at the foot of this street taking pictures of this place decorated with beautiful garden spaces. It extends for 400 meters and it would be an unparalleled experience to cross it by car. 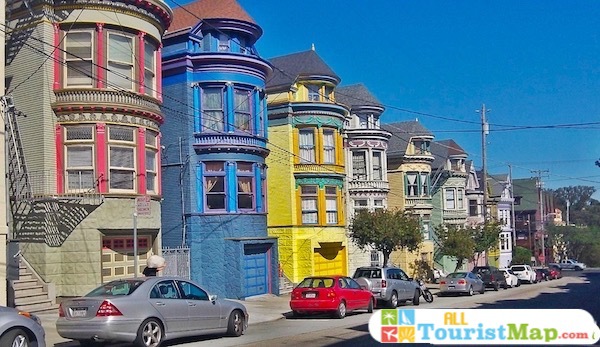 The modernist and Victorian movement being displaced by an open and bohemian revolutionary ideal; melancholic but rebellious without leaving the psychedelic theme is what defines Haight Ashbury, cradle of the hippie community. By the 1960s this subculture would mark a generation in art, music, philosophy and way of life. Interweaving cultures and opposing the wars of the time. This community is open to all who wish to come and get infected with the good vibes of its people who carry the hippie style and spirit. Handicrafts, live indie music and clothes with psychedelic details are usually the products shown in their shops. It is located near the Golden Gate Park. If you’re nearby, you know it wouldn’t be a bad idea to take a walk around the place. 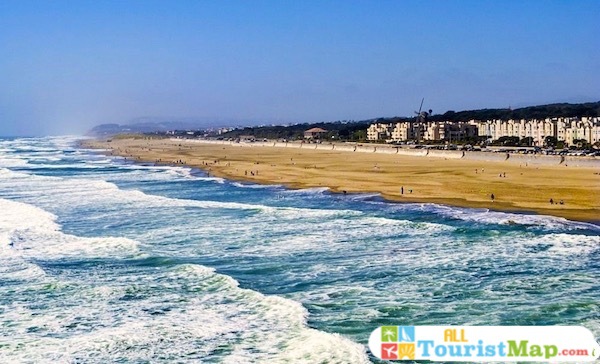 As a city facing the Pacific we could not stop recommending some of its beaches. We have chosen Ocean Beach which is one of the most popular in all of San Francisco. It is ideal for putting your feet in contact with the humidity of the sand and feeling the soft sea wind. The beach simply lends itself to long walks along its coastline since swimming is prohibited. It will be perfect if you are at the Golden Gate and you can use this beach as a starting point and take the tour. However, water sports such as kitesurfing are practiced thanks to its favorable winds. The experience of appreciating the sunsets is priceless. If you use the subway, you can get to this beach at the N station. 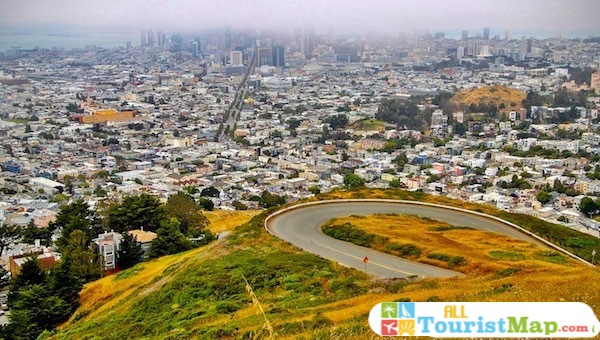 There is no doubt that the best views of San Francisco, including its bay, are obtained from the top of these twin mountains of almost 300 meters of altitude. However, they are not the highest hill in California. It has been conditioned so that visitors can climb and use its viewpoints and have a nice time in good company. The journey to the top is usually a bit long. Many prefer the bicycle or tourist bus to go to the top and get the challenge trophy, to have a complete image of the beautiful city of San Francisco. But some are reluctant to use transportation, despite the effort of climbing, thinking that the sense of adventure is lost if they do not go on foot. It is a matter of preference, the important thing is to enjoy the picturesque sites, as well as to appreciate the pleasant company.

San Francisco as a lodging is the counterpart of the different options of pleasant fun for the pocket. But also, we have the best way to introduce you to this city; because of its innovation, it presents lodging modalities that will allow you to compare the one you like best. Anyway, in our map of hotels in San Francisco we leave you with those options you can’t miss. After all, if you’ve come this far, you’re probably willing to pay for a hotel that’s right for you and your company. We recommend this elegant Hilton San Francisco Financial District for excellent views at the beginning and end of the day. You will have China Town and the Golden Gate as close as possible.