Global country, which projects itself as the maximum exponent of Western culture. We are in front of the land of the “American dream” of the hotdogs, the big cities, the beautiful people, and for sure the biggest diversity of nationalities in pleasant union and looking to one side, the flag of the stripes and the stars. Our tourist map of the United States is loaded with all the information that will help you undertake the greatest adventure, in the country of Hollywood, of Abraham Lincoln, of the East and West coasts, of Marilyn Monroe and of the relentless nature so varied that it can be experienced from all over its geography. Let’s be honest, in your life you have wanted to come and kill leisure with its parks or simply to merge in the metropolis with one of the most open and libertarian societies in the world. This is your moment and you must live it.

Tourist Map of the United States

It is officially named after the United States of America. It is the result of constant changes in its geopolitics since the 18th century, going from thirteen English colonies to a period of independence, from the Civil War to the consolidation of a union of fifty-four Confederate States. Country that fought spaces with two great countries of the continent as they are it Canada and Mexico. It participated in two world wars and a cold war with another antagonistic continental power. Who would have thought that the outcome of this nation would be that of the world’s leading superpower, and that with its influence even from ancient times it only had to occupy the privileged position it deserves in world tourism. The United States lacks nothing; the Caribbean, the Atlantic, and the Pacific and the continent are its natural migratory channels, where all converge to adopt the gentleness and strengthen this model of heterogeneous society. 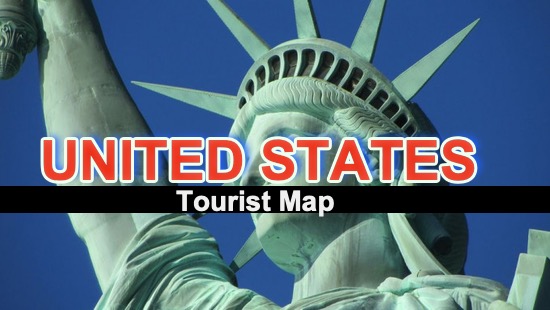 Tourism is geared towards recreating the American dream. It has designed a charm for every taste and all inclusive. The gastronomy and the architecture of vanguard are lived in cities like Chicago. The entertainment has been implanted in the heart of Los Angeles, and the good vibe of California, the best of the West Coast or West Side. Leisure and gambling remain in Las Vegas. The attractions of the marine world and the paradisiacal beaches have no competition in the state of Florida, along with its largest community of Latinos, with whom you can find some things in common. To the East Coast, New York; lavish glamour and modernity in a well-planned city and its Statue of Liberty. Not to mention the world’s largest museum complex, the Smithsonian Institution in Washington DC where you can access American history.

The country’s capital awaits you with its stately and historic sites. The vast variety of museums, the best in the world, the gardens, the monuments project respect. While it is true that you can visit it in a single day, you run the risk of not going deep into each site, and apart from that not enjoying the other side of the fun and exciting Washington DC. Its main neighborhoods like Georgetown have the momentum of a historic city; elegant but fresh, modern at the same time. You’ll love the National Mall with its huge obelisk and esplanade where the Washington Monument and Abraham Lincoln Memorial meet face to face. You’ll also want to cultivate your knowledge at the National Air and Space Museum, one of the many belonging to the Smithsonian Institution. The White House and the Pentagon are waiting for you, too.

Definitely the second capital of the country for its economic and cultural power has been New York. It seems to be a country apart and able to stand on its own feet; its way of life is longed for by many and envied by others. You’ll be facing five areas that make up the city in a strange mix of urban centers among well-connected islands with their own identity, with Manhattan at the forefront. The Statue of Liberty has been the icon of the city; an emblem of freedom in the world and the concept it has with the Yankee culture. The Times Square as a meeting point and the fifth avenue will make you enter in a city ecstasy, inviting you to navigate in its flow. Feel the financial pulse as you meet the bronze bull on Wall Street. If you want to go further you can visit Brooklyn, and the rest of its districts.

The capital of entertainment and the seventh art. A place where the intimacy of celebrities rests with an open eye. Its famous Hollywood Avenue, Chinese Theatre and Universal Studios will make you sweat if you enter with the intention of leaving the same day. It’s worth giving yourself over to all that it has in store for you; put time and worry aside. You can take a photo tour to the Hollywood sign, and visit a lot of curious museums. Then you can get ready to enjoy one of the busiest nightlife environments on the West Coast. Los Angeles is the most popular city in Southern California and deserves a good time.

Mark an itinerary ahead of time before Las Vegas engulfs you with its full spell. The so-called City of Sin awaits you with the most striking game centers and unusual attractions in its huge hotels. A place for the nightly party to go at a frenetic pace. You will love the variety of nightclubs that manage to catch the visitors with their themes. Don’t forget your camera, don’t forget your lucky boots. You’ll have to prepare yourself for a crazy adventure with friends, or a joyful and entertaining evening with your loved ones. Las vegas is tailor-made for everyone. But have a look at this cliché phrase that should not be underestimated; what happens in Vegas, stays in Vegas.