If you have in mind a different tourism, let’s say, something more exotic, and at the same time moved, then Bangkok is the route to follow. Bangkok Tourist Map shows you how dynamic tourism can be in Asia. It’s the perfect opportunity to show you how apt you can be to experience a completely different culture. With Buddhism in its streets, the bustle of its tarantines, the curiosities of its night markets, and of course its natural landscapes. All this becomes attractive under a modern atmosphere, which in turn coexists with numerous temples of constructions of ancient civilizations. It is a place to make tourism as you want, not without first documenting yourself for a responsible tourism in this absorbing city. And by absorbing we mean that Bangkok falls in love and catches everything hidden in it, and you will want to spend more days than planned.

Bangkok is a huge city, overwhelming in its complexity. The meaning of its name is a transliteration of the Thai “wild plum village”. Capital of the country and overpopulated city, with more than 8 and a half million people, in just 1,500 square kilometers of surface. It went from being a small commercial port on the banks of the Chao Phraya River to the country’s capital and epicentre of Thai politics, with enormous influence in Southeast Asia. Bangkok has positioned itself among the world’s most developed capitals for its culture, economy, politics, art and society. For lovers of urban adventure this is the city. The best information is obtained in a street map, where you have to buy in the tourist office Bangkok. There is an enormous offer in terms of tourist sites, and the itinerary can cover a whole day with them if you like. 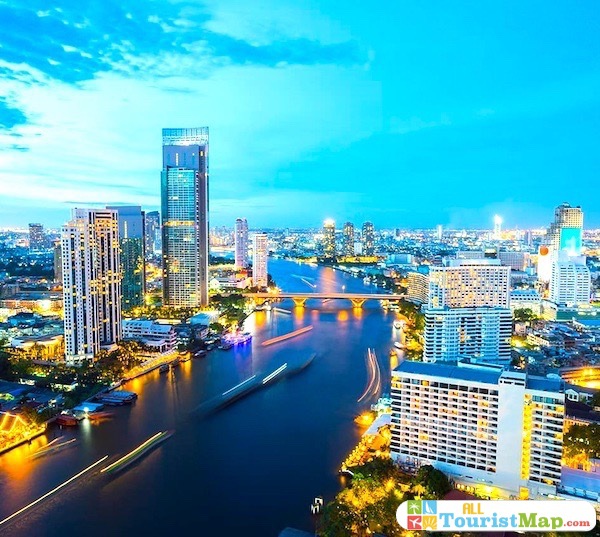 By this we mean that from the morning until the early hours of the morning there is life, movement, and vibration. Bangkok is one of those cities that never sleep, and its streets are a clear example. Its neighborhoods such as Soi Cowboy or Nana Plaza are well known. At night we can visit its markets like Patpong, go up to its buildings and contemplate a good night panoramic. Markets with an immense amount of merchandise stalls and curiosities are visitable especially on weekends, such as Chatuchak, with its many alleys where you can get lost. The fun does not end, and with the map of Bangkok to print you will have at your disposal different tourist sites, such as China Town, with the best of this culture within Thailand, stroll through the channels of Bangkok Klongs, or spend a relaxing afternoon in Lumpini Park.

This tourist guide Bangkok is thought to give you the most precise orientation of the places to visit. Due to the complexity and congestion of the city, it is ideal to have the necessary tools to know where you are going and which route is the most appropriate to access everything you have planned to see. From November to February, when it is not so hot, the visit is more pleasant. However, the festive months are the busiest and most intense. In April this opportunity is often given because you assume that a visit to Bangkok leads to a lively and adventurous tourism. Generally people who come take a couple of days to tour the city and a couple more for its surroundings, visit its natural landscapes and have contact with villages. Keep in mind a budget to be able to move without problems by means of taxis and tuk tuk.

What to visit in Bangkok 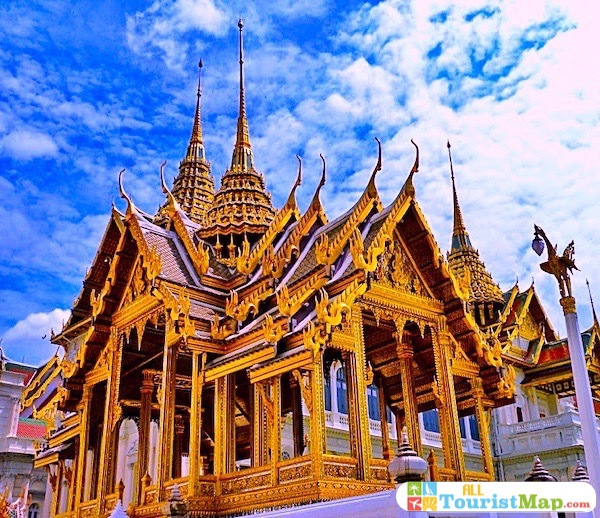 This monument is well known and reviewed by trevelers around the world. It attracts the attention of the palace complex, the Emerald Buddha, also known in the local language as Wat Phra Kaew. This imposing enclosure served as a royal residence between the 18th and early 20th centuries. The ceremonial acts of Thai royalty are now performed here. This place provided from an artificial island has an extension of 218 thousand square meters in which you can walk its corners full of fine Thai Buddhist art. From the Temple to the central courtyard you can see various constructions of different architectural trends, typical of local Renaissance art. Well, with a bit of European Renaissance, since its interveners were Italian architects.  For a price of approximately 12 euros you can do a complete tour every day from 8 am to 4 pm. 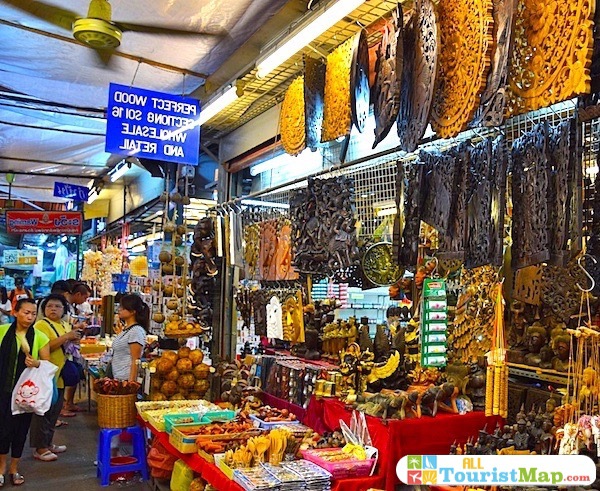 Bangkok is a city to be lost, in the good sense of the word. Of course, as long as you do it with a good guide. And the Catuchak market is alive sample, with more than 200 thousand visits daily and opportunities to explore in scale becomes more interesting. This place has about 15 thousand commercial establishments divided into 27 zones. There is everything to buy, and the influx of tourism is inevitable given the curiosity of how picturesque are their goods interspersed with thousands of objects that we would not get to mention. The recommendation when entering this market is to first know these 27 sections that divide the market. But if your intention is to go for something specific, make use of a map, and please wear light clothing, so that your experience is free of discomfort after an entire morning in such a hectic and lively atmosphere. 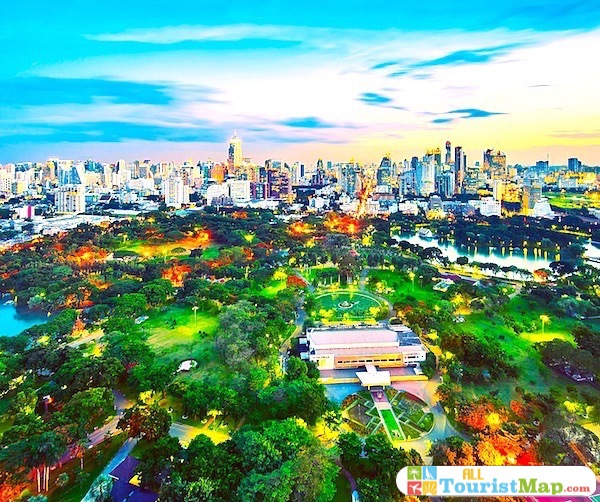 Bangkok offers a lively and bustling experience, but like every major capital, it also has its green lung in the heart. That’s why we’re sure you’ll love the idea of visiting its own central park, Lumpini Park. It is the place that contrasts with all that city dynamism. It is ideal for taking quiet walks and interacting with city dwellers in a different atmosphere. Its construction dates back to the early twentieth century and its planning includes a lake that floods with beauty for its serenity and reflection on the same gives of the city. It is common to see Thais taking Tai Chi sessions, children having fun in the spaces and families having picnics. Inside, different species of lizards live. In the afternoon, next to 6 o’clock it is traditional to hear the national anthem, it is time to stand up as a sign of respect. 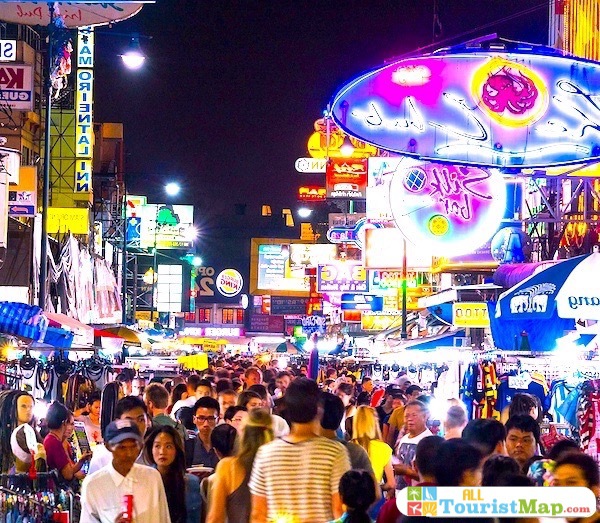 This street is well known among backpackers. Tourism is enveloped in a variety of nomads, seeking adventure and adaptation within this hectic and exotic city. In this place you will find an infinity of places where to lodge of economic form and to have contact with other visitors around the world. The sharing of experiences and visions comes to life along this street. Restaurants, bars and curiosity shops give it a bubble atmosphere, which many prefer to stay a season. From your arrival by the international airport you will have the possibility through its varied urban transport to go to this street that already in the 90’s gained fame through the film “The Beach” starring Leonardo Di Caprio, where it was already mentioned as the “Center of the Universe for Backpackers”. 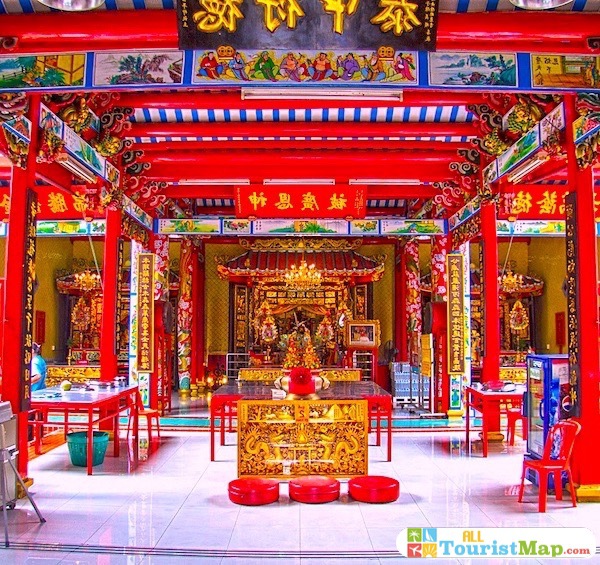 Bangkok is home to a Chinese corner. The customs of this settlement are rooted in the heart of Bangkok since the seventeenth century. Everything that represents it has been defining like other foreign cultures, the idiosyncratic spirit of Thailand. The Chinese trade in its beginnings was involved with opium, among other illegal activities. Today everything is limited to an organic and healthy trade in products of the Asian giant. Its main streets, such as Yaowarat, illustrate the day-to-day life of this Chinese colony. Visit its markets full of history and anecdotes such as the market of Sampeng Lane or Pak Klong. There are many curiosities or customs in order to attract luck, as in their main temples. In one of them you can make bank transfers to the dead. Even in one of its corners is the largest solid gold statue in the world. 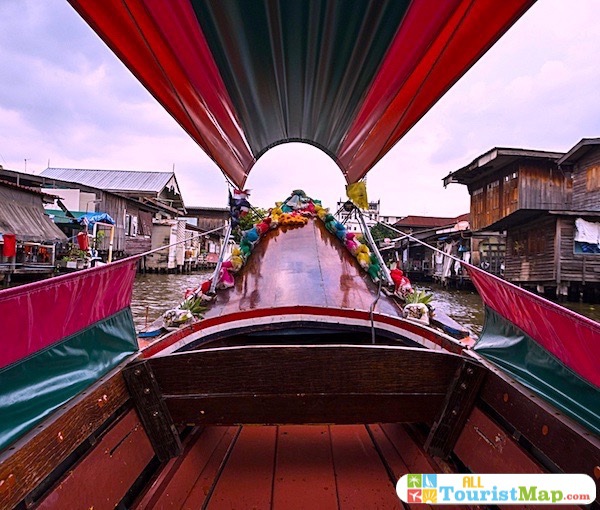 A walk in the style of Venice with the unique touch that gives Bangkok is lived through its canals. This activity is of more tourist importance than what we have been showing in our tourist map Thailand. At the moment it is possible to make tours for groups or individuals and the same ones are of one or two hours. Of course we recommend the longest, so we can see more things and about the day to day of Thailand on the banks of the river and canals. During the tour you will see an infinity of boats that serve as a means of routine transport for the villagers. Further west is the Bang Khlong Luang slum. Ideal to take a walk and visit its picturesque places. This site has the particularity that is inhabited by artists and it is common to see representations on stage and paintings for sale. 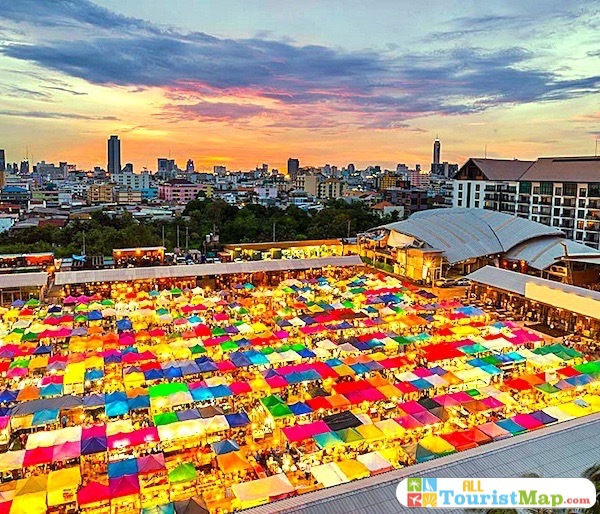 Many are the reviews about the night markets in Thailand. Here the nightlife unfolds in a sleepless trade, attracting tourists late at night. Here two key elements come together to make this type of place attractive, the gastronomy and the meeting places. Bangkok has several of these places, 5 of them very important and specialized in terms of type of merchandise is concerned. On this occasion we will mention the Patpong market, where the imitation of all types of clothing, footwear and objects makes it worthy of the label “fake paradise.  It is a more adult environment than the rest, so it is an escape to drink something and have a good time. It opens from 6 p.m. and its activity ends in the early hours of the morning. Locate it on our Bangkok map for printing, right on Silom Street. 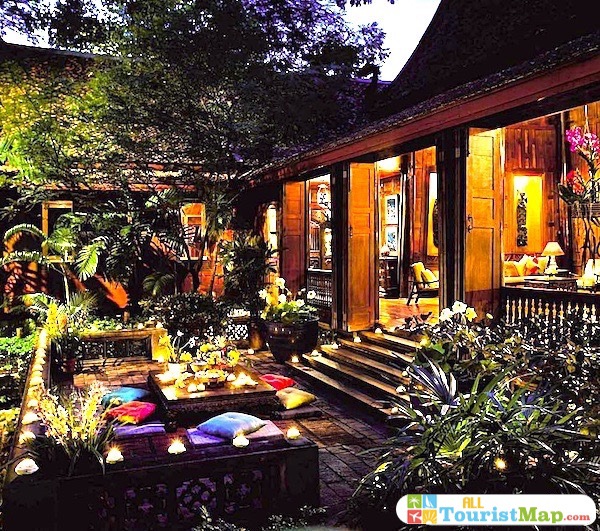 This residence was owned by silk entrepreneur Jim Thompson. It actually consists of a residential complex, which adds up to a total of 6 houses made of wood. This property was acquired in the late 50’s. Jim apart from being a businessman was a hardened collector of oriental art, so the visit becomes interesting to find numerous pieces that make up his collection. Its location is very central in the city so it is not difficult to ask about it. The figure of Jim Thompson is an enigma. In the 1960s, during a trip to Malaysia, he was never heard from again, after it was known that he was taking a jungle tour. Many hypotheses have been raised about his disappearance. It can be visited any day of the week from 9 am to 6 pm. 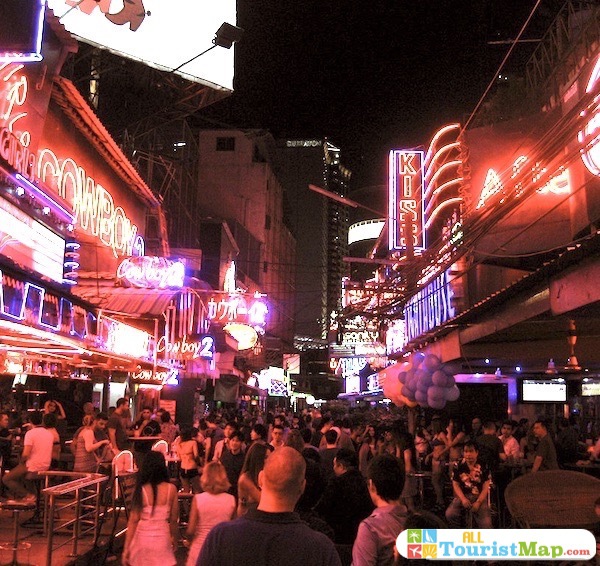 It’s a red-light district of Thailand, and one of the most popular in the city. Generally the European tourism concentrates in its more than 400 meters of surface to enjoy a moved and spicy night atmosphere. For this and much more it has gained international recognition for adult tourism. This neighborhood as well as others like Nana Plaza or the same night Patpong has a peculiar place called Go-go Bar, where bikini dancers make a sensual dance while tasting some alcoholic beverage. Of all the streets of this style in Bangkok this guarantees healthy and safe fun. The fun is to order for all kinds of tastes.

Map of Hotels in Bangkok

Of course Bangkok has hundreds and hundreds of places to stay. A good city of backpackers and adventurous tourists hosts sites of all kinds according to the price-comfort ratio. Map of hotels in Bangkok shows you this variety punctuated in their respective locations for you to choose the one that suits you best. We recommend one where you can have access to enough services to have a deserved rest after so much work, as well as close to the most central and striking of the city. The hotel Jasmine Resort offers the possibility of moving from the strategic of its location, near the central park. It has a swimming pool, air conditioning, laundry and meeting spaces, and its infrastructure is suitable for the entire family.