Throughout Russia you will have at your disposal trips to the inhospitable and unknown by most people. Although tourism has been very active for years, for Russia this vast and rich land is hardly being used. The enormous potential that nature provides blesses this nation with diverse ecosystems, Endless coasts the favorite place to go around the coast from a cruise, many rivers of vast dimensions and navigation channels, facing the Baltic, facing the Black Sea. Siberian tundra for interesting safaris, important mountain areas where the exploration towards the most amazing horizons will make you rethink the concept of Russia. Its history, culture and traditions are perhaps the most precious elements for the tourist. It is time to catch up with these wonders and mix them up in this tourist map of Russia.

When reality surpasses fiction, we come to conceive of the warrior nations that forged and marked the current offspring of the Russians. Scandinavia, Greece, Germania, Mongolia, join Slavic, Scythian, Polotvsy, to name a few cultures, those who mixed and left traces, even alive, of their history. Across 17 million square kilometers you will be able to undertake a journey through the country with greater extension, or point out some of its main cities. You will be able to understand the landscapes, the customs everywhere, magnificent natural and artificial monuments. Being located in part of Europe and Asia Russia is justifiable that it has more than 10 time zones. Currently it is a federation the former Soviet Socialist Union, which together with Ivan IV and Peter the Great among other periods one of the richest cultures to appreciate in a sway of destinations that you will not want to miss. 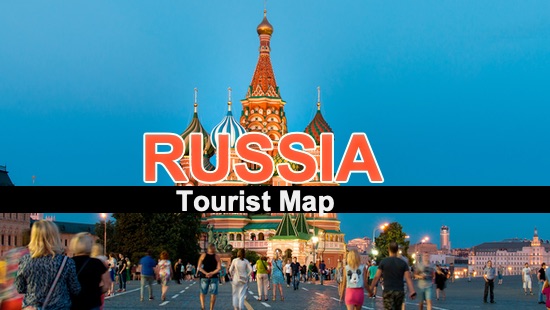 If you want to do tourism starting from its cultural potential you can get it from south to north, and from east to west. First of all, Moscow has a good number of very important buildings. The palatial St. Petersburg with its historical center that teaches besides the cultural miscegenation the essence of the Russian language. Another city that drags all the history of the Second World War is Volgograd, formerly Stalingrad. Because of its immensity Russia offers you many things to do and places to visit; we will have in one country an arid climate and perpetual winters to take advantage of, in ecotourism tours. But the most impressive thing is that when extending in the supercontinent of Eurasia the cultures left in the bordering towns with the countries that border to him leave still more the curiosity and the desire to cross it completely.

Surrounded by important buildings, many of them mark a different style from what we are used to seeing. The group of palaces in an area of 23 thousand square meters in what is called The Red Square. It is without a doubt the most relevant architectural nucleus of the country. If traces of the past are present, the Museum of History is the bearer of Russian events throughout its history, and you will see it in this site. The Cathedral of the Intercession astonishes both by day and by night with its colours and its curious domes. The Kremlin is more than a walled complex, it is the institutional and religious culmination of the Russian Federation. The Cathedral Square, the various government offices and former tsarist residences are included in guided tours ready to make you lose your head in the shape, color and imposing figures.

Walking through the streets of this city leads to appreciate the whim of Tsar Peter I the Great. It is the work that strives to move Moscow as the capital for the times of his rule. The face given to this city made him known as the “Window of Europe”. And rightly so, important ports for trade and the navy were added under the style of the Netherlands. It was the first residence of the monarch from which the name also comes from. Apart from beautiful palaces, a Venice-style canal runs through the city which you can add as an option if you want a quiet walk on barges, visiting the Aurora Cruise and the Winter Palace is what you will get when you stroll along its seafront. If you follow the tour of its historic centre, your journey will be enhanced by stepping into the Hermitage Museum.

The scenario you will encounter when visiting the ancient city of Stalingrad will be relatively new. If you know about history then you’ve come to this place. Perhaps it is your interest to witness all the accounts of that famous battle that marked the course of Nazi Germany’s rule during the invasion. The Volga River, a faithful witness to the Russian offensive today, is home to much of the city’s life. Different leisure activities are carried out, so that you can get into the rhythm of a city that is latent and proud of its legacy. The memories of the history of war will always be represented by its honorary monuments. You can visit the Mamayev Kurgan complex and the House of Pavlov, they symbolize the events of the Battle of Stalingrad. Along with this, the State Panoramic Museum will enrich you with history.

Maybe you started hearing about Sochi during the Winter Games a few years ago. But the truth is that the Russian brand of this tourist giant is made up of activities on the snow. Skiing is the main attraction, with more than 100 kilometres of slopes, and its paradise beaches spread out along a long coastline. Beyond that the city awaits you with one of the most important gardens in Russia; preamble to climb Mount Akhun with the best views of the city, villages and coast. Within the natural route you will find wonderful ecosystems where animals of the region echo in an environment full of life. And next to its spas and snow rises a city that has an intense activity. During the nights, bars, restaurants and a modern urban life await you anxiously.