Know with our help the most touristic places of the country of Mexico, we have prepared 24 Tourist Maps of cities of Mexico so that you do not miss any place of this beautiful land.

Land of the Mayas and later conquered by the Spanish, Mexico is located in the northern hemisphere bordered by the United States to the north and Guatemala and Honduras to the south. It is bathed by the Pacific Ocean to the west and by the Caribbean Sea to the east.

A visit to this wonderful country will make you understand how big it is, where the biodiversity provides exuberant landscapes. Beyond this, its people, with their variety of traditions, different cultures, and gastronomy declared national heritage by UNESCO, converge in a beautiful mestizo dance, a world of its own that you can take full advantage of in one vacation pass. In tourist map Mexico we will give a tour of the best tourist destinations.

Here important cities that stand out among the entire American continent, give you the best offers for entertainment. Come and take a walk through its historical monuments, some of these listed among the 7 wonders of the world. Mexico boasts a vast nature in terms of quantity of species, beautiful beaches and natural reserves. All this richness has given it the title of the 4th most diverse country and it will be worth going to check it out and feel it. 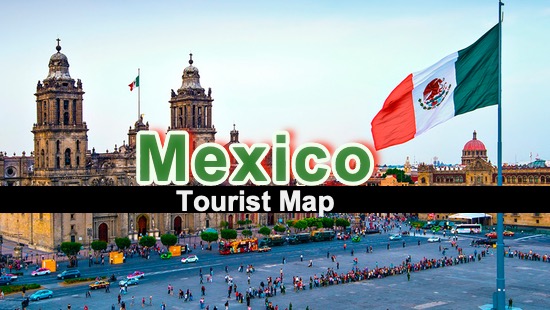 Most visited places in Mexico

Listing of the Top 6 destinations in the Country of Mexico: Although we recommend visiting all the possible cities to know Mexico in depth, these are the most famous and demanded destinations in the country. It is essential to know its capital city, Cancun and Playa del Carmen as a rest destination, Chiapas for its revolutionary past, Acapulco and Guadalajara.

As time goes by, Mexico’s tourist offer becomes more and more attractive to millions of people. The number of visitors is large and growing steadily. Mexico is a country established in the northern hemisphere of the American continent. Its capital is Mexico City, which is projected among the most ideal cities to visit. It has a territorial extension of 1,964,375 square kilometers, placing it among the most important in Latin America. This country boasts what others cannot in the continent and is the exit to the Atlantic Ocean by the Caribbean Sea and the Pacific Ocean, its coasts are full of adventures and diversity of options for all tastes.

The Mexican Caribbean has some locations that are the envy of half the world so every year Mexico is getting many of the tourists who visit them. It has crystal clear waters that are sensational, a marine diversity typical of warm climates and is appreciated by white beaches and palm trees.

Tourist destinations in the Mexican Pacific

The Pacific Ocean, has its name from its discovery in these lands precisely because of the tranquility of its waters. It has world famous places like Acapulco, or Puerto Vallarta is a perfect tourist destination for travelers seeking tranquility, beaches, turquoise waters and partying.

Historical and cultural destinations in Mexico

Places like Yucatan, Mexico City or Guadalajara do not help to better understand the past, culture and present of Mexico, so we consider it important for any good traveler who wants to know these lands and their people to visit those places that have printed the personality and culture of the country of Mexico, to discover its ancient Mayan and Aztec cities, to enter the colonial Mexico and end up knowing the current and independent Mexico.

It is a very old country, with traces of civilization dating back 14,000 years. Ancient Mesoamerican cultures such as the Aztecs or the Mayans marked their dominance in sophisticated ancient civilizations. Today you can access all this information and experience its traces and secrets. Many of them attached to the main cities like Guadalajara, Puebla, Tijuana or Mexico City, where every street and corner is a reminder of the ancient metropolis Tenochtitlan. Teotihuacán or Chitzen Itzá are also places of interest; they represent a trip back in time to a majestic and imperial past. For those looking for beaches and sunny environments, Acapulco and Cancun are the main options for high altitude tourism. As if this were not enough, Mexico as a cultural country has important festivities such as the national fair of San Marcos, and the Festival of the Skulls, among others.

Every Mexican city hides a lot of history and culture and also allows us to meet its people and learn from them.

The best thing about visiting Mexico City is that the options are numerous and diverse. Here the cultural concentration and the great mass of population is proud to exhibit the spirit of the ancient Aztec metropolis. It is one of the most loved places by tourists because of its historical center, better known as the Zócalo and declared heritage by UNESCO. There are an infinite number of streets where you can get lost and get to know a varied gastronomic offer and leisure places. This city has the honour of having the largest number of museums concentrated inside it.

Ideal for planning a season or escape in an atmosphere of beautiful beaches and sunshine. This magical place gives you the pleasure of belonging to the Caribbean where the tropical climate gives you warmth, especially for those who escape from winter seasons. In addition to its beaches, Cancun has archaeological sites where we can appreciate among many one of the 7 wonders of the modern world, Chichen Itza. So excursions in this construction and others from the Mayan past are the order of the day through guided tour packages.

Continuing with the sun and beach options we have Acapulco. Famous for its spas and variety of hotels to choose from to suit our needs. Underwater activities such as diving or jumping in the Quebrada are part of the adventure tourism available. This city is very popular among famous people and the promotion of its image in film shoots. In addition to its main offer, you can make historical tours, such as its cathedral, or a visit to Roqueta Island.

Puebla is the capital of Chile, the mole and sweet poblanos, gastronomy very well stopped at international level. It’s a city full of history, it’s interesting to note that the independence and revolutionary feats of Mexican history took place here. It is one of the points of forced visit if we are between Veracruz and the city of Mexico. This city preserves an important cultural reservoir in its historical sites such as temples, the artists’ quarter and the famous Talavera. In the middle of the Zocalo, starring its cathedral, sounds excellent as a starting point for the tour. Nearby we will find cafes and restaurants, which offer good points to meet and share.

This city has an excellent hotel menu and good land access, as well as natural sites and beaches. Its architecture and gastronomy give it an important place among the leading cities in national and international tourism. A visit to this city cannot be precisely a vacation season. A weekend getaway may be programmed. Because of its wide appeal it has been taken into account for international congresses and summits. It is considered the pioneer in adventure tourism. The sites of interest that testify to this are the San Juan de Ulua fortress, the Veracruz Aquarium, the Inbursa water park, the Wax Museum, the Malecón and the Zócalo de Veracruz

This city is one of the most important in terms of tourism in the country and in Latin America. It concentrates its wide culture and traditions, appearing as the capital of tequila and mariachi, emblems of Mexico. Among the architecture that can be seen are the cathedral and the Cabañas hospital. Natural and thematic parks, zoos, as well as colossal works such as the Millennium Archs, make up the urban life. Guadalajara is proud to show its visitors its perfectly preserved traditions such as the charrería, the folkloric dance, or the sarabe tapatío. But at the same time, it wants to make clear that it is growing at the same pace as modernity since it is a city that is recognized for being a producer of technology.