If you wish to spend a few days in some beautiful city, do not hesitate to visit Punta Arenas. Here is a tourist map of the city where you can find many places that you will like. This beautiful place is known as the “Capital of Southern Patagonia” and you can enjoy a nice vacation in this tourist site. You will probably have to pack several coats, since it has a cold mountain climate, which you will enjoy very much. You will be able to visit it in any season of the year and stay in any hotel that is all over the city, we also have a map of hotels in the city for your help.

Punta Arenas will undoubtedly be your favorite place, its climate, its activities and its hotels will captivate you in the best way. Every year tourists visit this beautiful city that aims to provide the best services to its tourists. Its climate is cold and rainy and has no dry seasons, its usual temperature is 8 º C and in summer temperatures are 10 º C to 18 º C. Its geographical location is totally beneficial for this city both politically, economically and touristically. It is a highly tourist city, also more than 15 countries use it as a base port for trade. It is located in the homonymous commune that belongs to the Electoral District Nº 60. Before the Panama Canal was opened, this was the number one port of the Pacific and Atlantic oceans. Punta Arenas is the most populated city in Chilean Patagonia and its quality of life is classified as one of the best. 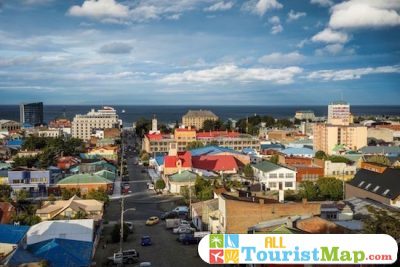 It is a very cultural city, like most Chilean cities, festivals are celebrated and daily life is very active, its outdoor activities are incredible and there will always be something to do, even on a rainy day. Years after year, this city celebrates a party called “winter carnival”, in this festivity floats parade around the city and make a great party, tourists from all over the world, especially from Argentina visit the city that season, because it is a great party that besides being fun allows to proceed to a mixture of cultures. This festival lasts several days and tourists stay at the hotels closest to the city center. There are also many museums to visit in and around the city, don’t forget to visit the historical center of the city and take a cool walk through it.

If you want to know the necessary tourist information, this is the ideal article for you. This tourist guide of the city will help you solve all your doubts when visiting Punta Arenas, a wonderful city that will provide you with great adventures. If you want a quiet vacation but without losing the fun all these places to visit in the city will complete your vacation, you can practice sports like diving, buggy, sport hunting, rowing and you can give great bike rides that will allow you to appreciate the beautiful landscapes that the city has. It will make your vacation easier from where to stay to where to eat.

What to visit in Punta Arenas 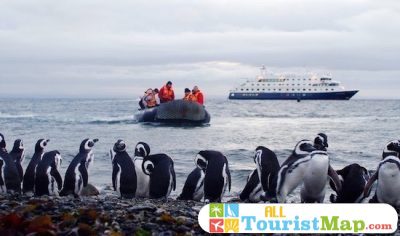 This island is located in the Strait of Magellan, where you can find one of the most important penguin farms in Chile. Known as the Natural Monument of the Penguins, for this reason it is prohibited to fish around this island. It is protected by a corporation prepared for this purpose. In this penguin colony has been calculated about 60.000 thousand pairs of penguins. The most recommended seasons to make this beautiful trip are from November to the first fortnight of March, you can also travel on other dates, but you will find less penguins. You can also find other species of animals such as Magellanic penguins, cormorants and sea lions. The trips to this island leave from the Tres Puentes terminal located in Punta Arenas, it is done by sea and it is about 37 kilometers away from the city. 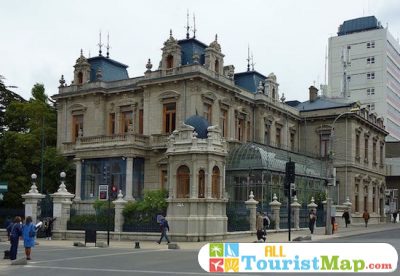 It’s a historical building of the city that this located opposite to the square Muñoz Gamero, is an important symbol of the city since it represents his history and the architecture of the previous epochs. It was constructed in the year 1895 and 1905, by a French architect called Numa Mayer and was declared historical monument of the city. Sara Braun was the owner of the house for a long time after emigrating to Chile she married a Russian businessman of great economic power, after Sara Braun’s death her nephews kept the house and sold parts of the furniture. Then the building was adapted to a museum where tourists can see closely the furniture that occupies the house and beautiful o9bras of art, also works as a hotel, meeting center and by the restaurant the tavern. It is one of the most striking buildings in the city. 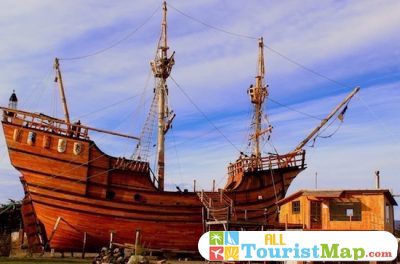 In this muse you will find the exact replicas of the most important ships of the Magellan and Chilean Antarctic Region. It opened its doors to the public in 2001 and is located on the banks of the Strait of Magellan, about 7 kilometers south of the city. It’s a private museum which the government has granted to his owner several medals for the incentive of the history, the art and the tourism of the city. You must pay a fee to access the museum and these change depending on age and if you are a foreigner. Besides the replica of the ships this museum also exhibits items such as antique weapons that were used while sailing on these ships, copies of original documents important to the city and instruments for navigation. This place has a square where you can observe the sea while you rest, you can also take pictures of the great landscape that surrounds this museum. 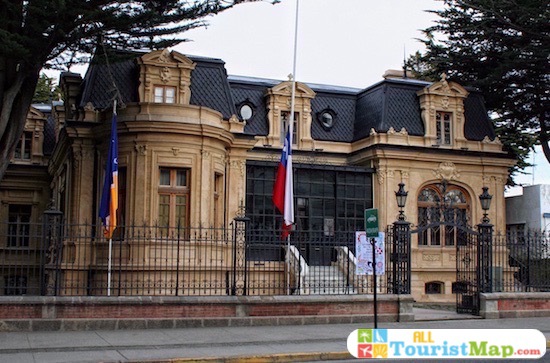 It’s a museum that this located in the city of Punta Arenas, and lodges mas of 1800 objects related to epoccasions past that go from the 16th century up to beginnings of the 20th century, pieces that are of great importance for the history of the country and the city. The building where the museum is located was declared a national monument in 1974. This museum has three exhibitions: history, period and baseboard. In the period section, it shows furniture from Europe with different art styles. In the history section they show a lot of articles related to the art and history of the city along the centuries and in the plinth section they show the functions of the old palace like its rooms, kitchen and bedrooms. In the basement of the building they make presentations and art exhibitions throughout the year. 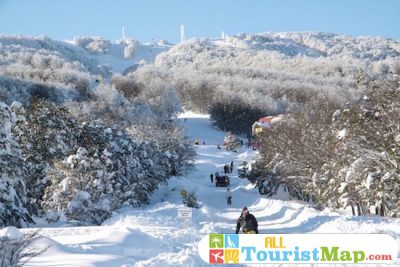 It’s a club visited every year by tourists of different pastes of the world, has 14 fields to practise ski and in the winter epoch it’s ideal to practise this sport. It’s one of the few ski fields that from its snow-covered mountains has a view to the sea and panorama to the whole city of Punta Arenas. Its snow allows you to have a good experience practicing the sport with a special mixture of cold and wind. This club is made up by sportsmen who are passionate about this sport and whose purpose is to encourage this kind of sports in the mountains and provide tourists and anyone visiting this place with the best assistance. It has a refuge to rest that has a cafeteria where to pass the time. As far as equipment rentals are concerned, you can get them here for a very accessible price.

Museum of the Memory 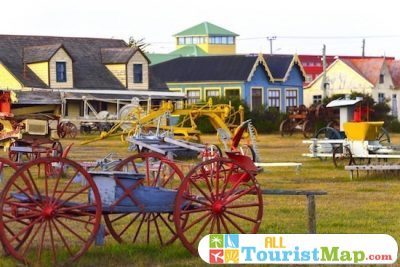 This museum was created in order not to forget history as time goes by. It shows objects such as wheelbarrows, machinery and tools that come from the origins of these cultures. This was a museum created in 1969 with the aim of showing the evolution and how people lived from the 1880s to the 1950s. In the first years that this museum opened its doors, it had a total of 50 objects of all kinds, such as wheelbarrows, carts, carriages and any kind of mechanical transport. It has sectors of totally original constructions that have been reconstructed for exhibition of the museum, houses that have been set totally to the style of these old times and at the present time already it counts on but of 3,000 thousand objects that show the history at the present time. 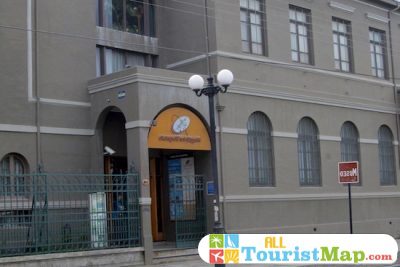 It is a museum where they completely show the aetiological, historical and biological collection on the strait. And it is a total pride for the Catholic Church. In 1893 the Salesians decided to create this museum to show people their history, everything they went through and came to where they are today, the museum is named after its first director. The two-story building opened its doors to the public with only 700 square meters and today has 1700 square meters, because it has had to be expanded to show all the objects that have been collected so far. It is open from Tuesday to Saturday and in the spring from Tuesday to Sunday, a fee must be paid to enter the establishment and the price changes depending on the age. It has services such as parking, restrooms, libraries, store, guest book or suggestions and is located in Bulnes 336. 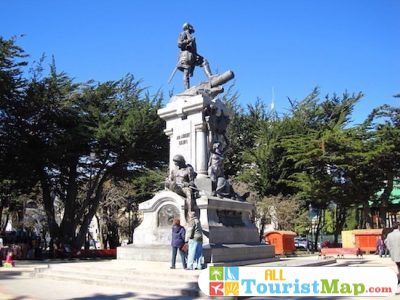 It’s a monument that is in the middle of the square Muños Gamero and is dedicated to the fourth centenary of the discovery of the Strait of Magellan. It’s a sculpture of 10 meters high cast in bronze by the artist Guillermo Cordova, this sculpture represents the Portuguese Hernando Magellan who undertook a journey in command of 5 more ships in which he would undertake the journey around the planet, the aim of this trip was to find a way south that would lead to the Moluccas Islands. The monument has a myth that tells that one day a Spanish sailor arrived and he found the sculpture so big that he decided to tattoo it. A few days later he returned with great fortune; history says that he who passes by the square and does not kiss the foot of Patagonia will not return with great fortune like that Spanish sailor.

Map of Hotels in Punta Arenas

If comfort is what you are looking for, this map of hotels in the city will be very useful, since we show you the best options, so that the tourist can choose the one that best suits his conditions. In Punta arena there are many quality hotels, but for the comfort of the tourist you have to be very attentive so that you don’t regret it later. These are the best options for accommodation.  Hostal Patagonia, is adapted for all types of accommodation, has 20 rooms (single, family).  It has breakfast, free WiFi, parking, tourist information and reliable tour sales to get to know the city and it is located in a large area in the center of the city. Hotel Isla Rey Jorge, is a centuries-old building that was adapted for a hotel that offers all the necessary amenities, and also has ecological features to care for the environment. It is located 2 blocks from the Plaza de Armas, in the financial center of the city.

Video of Punta Arena, the most impressive tourist destinations