La Paz is not only the capital of Bolivia, but also the city and the highest governmental and administrative headquarters in the world. Its charming city with an important heritage of colonial architecture stands out because it is surrounded by the beautiful mountains of the Altiplano, above all by the great snow-capped Illimani, which became the symbol of the city and the country, which since 2012 is considered one of the seven new wonders of the world. In this tourist map we will tell you how fascinating it is to know the most populated city of Bolivia, with beautiful natural landscapes that contrast with its indigenous legacy and its political and cultural importance.

The experience of visiting the tourist city of La Paz will become unforgettable. The metropolis, founded on October 20, 1548 under the name of Nuestra Señora de La Paz, by the conqueror Alonso de Mendoza, was initially an Inca settlement with which the pacification process of the viceroyalty of Peru was honored. Later that settlement was transferred to the valley of Chuquiago Marka, where it is at the moment and whose name means “gold chacra”, due to the mining exploration that was carried out in the rivers of the place. Since its inception was conceived as a commercial transit city between Potosi and Lima, so it was controlled politically and economically by the viceroyalty of Mar del Plata. After its independence, La Paz became an important multicultural center, not only in Bolivia but in all of Latin America, mainly due to the indigenous legacy it preserves to this day. 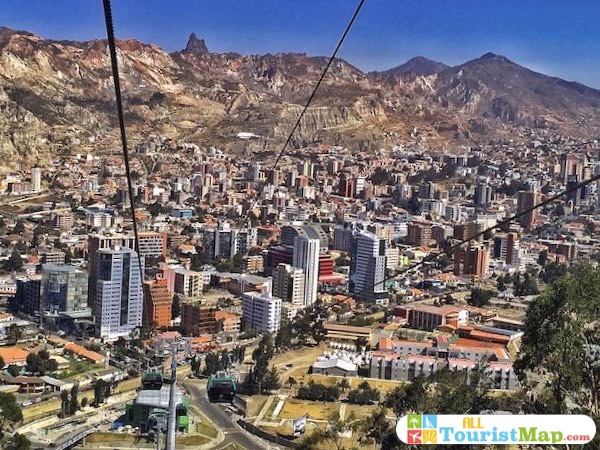 The tourist attractions of La Paz are diverse. They range from its colonial architecture, much of that infrastructure exists as it was originally built, as the restoration process has been slow because of the cost to the owners. But it also has a series of museums that tell the pre-Hispanic history of this pate of the continent, as well as the historical evolution of the city, in modernity and contemporary times. There are also a series of heritage buildings with interesting architectural and pictorial styles that tell the history of Bolivia in their own way. This is complemented by beautiful natural landscapes that can be enjoyed in a pleasant temperate climate, whose average temperature is 16 degrees Celsius most of the year, even if it has rainy summers and dry winters.  La Paz has an attractive cable car system consisting of five stations, which links it with cities like El Alto and can mobilize about seventeen thousand people per hour and boasts the title of being the highest, longest and most modern cable car in the world.

La Paz is an incomparable tourist destination. Enjoy the city from the viewpoints of La Paz, places that offer a wonderful view of a city surrounded by mountains and hills, also bordered by the Cordillera Real, as well as immerse yourself in a varied nightlife and an impressive natural visual spectacle. In addition to the visits to the artisan markets in the streets Sagargana and Calle de Las Brujas, places where you can access the art of the region, made with the hands of the Indians and whose range of objects goes from clothes and accessories made of alpaca wool, garments in metal and precious stones. Everything from the most autochthonous of the region. The city is a center in which converge the migration of nearby peasant villages that came to the city between the sixties and seventies of the twentieth century, as well as other countries although on a smaller scale.

What to visit in La Paz

The J’Acha Kollo viewpoint is one of those that offers more visual amplitude than those that exist in La Paz. In fact, from there the natives began to see the city and one of the first rebellions arose that led the natives to achieve independence. This happened in 1781 with the uprising of some indigenous leaders who could better visualize the seizure of the city from there. Located in the area of Villa Nuevo Potosí, today, in addition to offering one of the most impressive views, it is an indigenous worship center to perform ceremonies of gratitude to the Pachamama or mother earth. From its heights you can appreciate the majestic snowy mountains that surround the Bolivian capital. 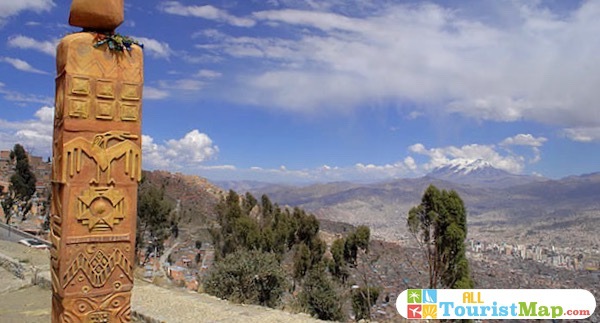 El Mirador Sallahumani has a beautiful panoramic view of the city, from where you can appreciate in all its splendor most of La Paz under the shelter of the snow-capped Illimani and the mountain range that surrounds the metropolis. It is one of the viewpoints of easy access since it is located to a side of the Highway La Paz- El Alto, to one hundred fifty meter of the toll. Of its location stands out “la mamacoa”, a female figure made of stone, which belongs to the Kallawaya culture. Visitors can access this viewpoint by public transport minibuses on Routes 202 and 221, as well as by four-line minibuses. 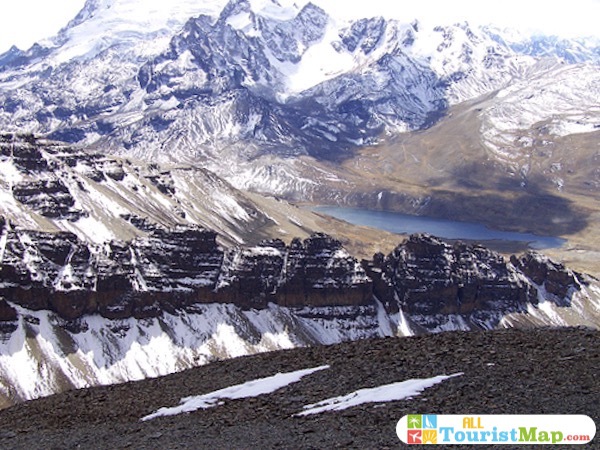 Chacaltaya Mountain is a beautiful and interesting experience, even for people who have not had the experience of climbing mountains. This snow-covered mountain, which in the 1930s was the highest ski slope in the world, has the particularity that its route does not last more than one day and with a walk that lasts, on average, two hours from the refuge that is the place where the bus arrives, from there the route is done walking to the summit. From there, an unparalleled landscape may be observed in which the huayna potosí stands out and which may be observed partially covered with snow. 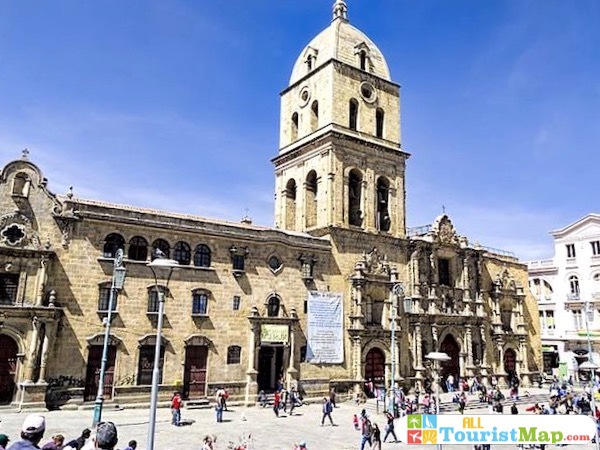 The Church of San Francisco, located in the adjacencies of a square with the same name, is a religious building was built in the sixteenth century and is a representative of the mestizo style that combines Spanish architecture with pre-Columbian art and that this mixture can be seen both in its facade and inside. Visiting it is also a gratifying experience in the middle of the tour through the Bolivian city, which in most cases becomes agitated and noisy because of the large number of inhabitants, so that this Catholic religious temple, which reigns peace and silence, is a kind of oasis in the city. 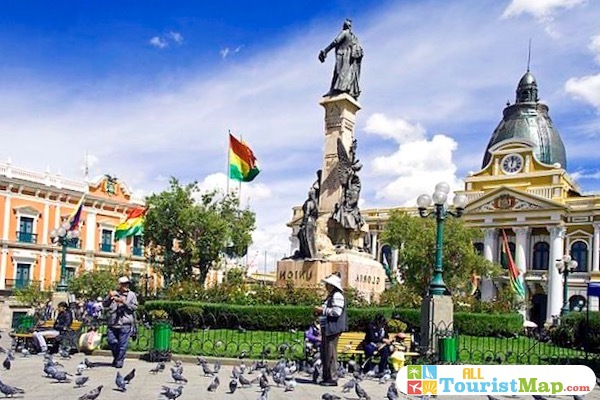 Plaza Murillo is the main and most important square in La Paz, as it is the heart of the city. It takes its name in honor of the Bolivian hero, the mestizo Pedro Domingo Murillo, who led and was precursor of the independence feat of Bolivia. In the center of this square there is a monument in memory of the patriotic and martyr hero and the surroundings have great political and administrative importance, as are the headquarters of the Presidential Palace, the Cathedral of the city and the Congress of the Republic, whose clock runs counter-clockwise. In its surroundings is the historic center of La Paz. Murillo Square, designed in 1558, was the scene of several revolutionary struggles that occurred in about 200 years. 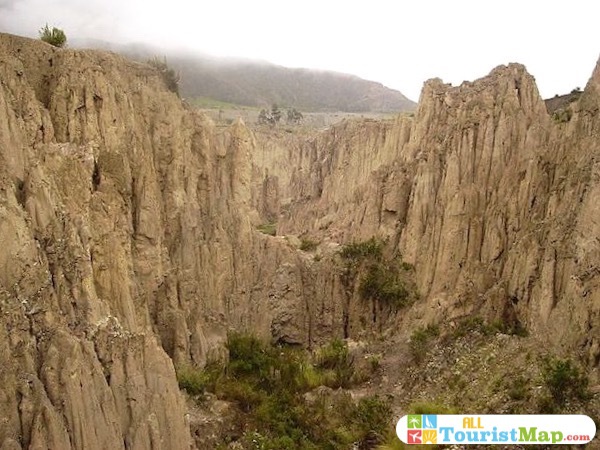 Valle de Luna is one of the most beautiful natural places in La Paz. Located in the south of the city, in the most elegant and exclusive areas of the metropolis, this valley natural canyons in the high part of the mountain. These canyons are the result of erosion of the elements against the mountain, whose main material is clay. The route does not last more than one hour, since the route is short. But, in the middle of the tour you can appreciate a series of cactus, rocky peaks and a landscape that shows the most typical of the Andes. The arid beauty of this place was completely appreciated by astronaut Neil Armstrong in 1969, when, upon observing the characteristics of the valley, he was reminded of the moon landscapes, which is why he named it Moon Valley.

To be in Calle Jaén is to walk through the historic center where a cultural experience of the best in La Paz is offered. In this street there are several old houses that now function as museums and exhibitions of all kinds, even crafts. In the area highlights very typical streets, such as the Callejón Cabra-Cancha and the famous green cross, whose history is said to exist to ward off evil spirits. The street is paved, most of the houses have balconies, so it is a colonial experience, there are also wooden structures and facades with tiles. On the site is the museum “La Casa Murillo,” which shows the best of colonial architecture and exhibits works of art by local artists.

The Metropolitan Cathedral Our Lady of La Paz is a religious building is one of the most important in Bolivia. It was built in 1692 and after its demolition in 1831 it was rebuilt in 1835 to be reopened in 1925. Its architectural style is baroque and neoclassical, in the facade there are five portals, the main one has to each side three columns of Corinthian style and in its interior it has five ample central ships. Its architectural work was concluded torally in 1989, year in which two lateral towers were included. In an adjoining chapel are the remains of Marshal Andrés de Santa Cruz y Calahumana, an outstanding Bolivian politician of the 19th century.

The Mercado de Hechicería, also known as Mercado de las Brujas, is the place where visitors can learn about the traditional rites of the Bolivian Indians. Within this market, located at the top of Santa Cruz Street, you can access the best of the ancestral shamanic rites. There are also traditional rituals such as the sahumerio to invoke the sacred power of Pachamama or Mother Earth. It is the ideal place to acquire local handicrafts of wood, gold and silver and other really curious products that serve, according to the Aymara tradition, to perform ancient rituals of this indigenous people. Some of the interesting objects are: dissected fetuses of Andean animals such as alpacas and llamas, also there are beaks of dry toucans, herbs and seeds.

Mirador El Montículo Park has a romantic tradition behind it. This is the place where Bolivian maidens received their first traditional kiss. Also, from there you can appreciate an incomparable view of the city, its structure has well decorated arches and doors, as well as places to rest and have a picnic. This is a site located in the southeast of the city in the neighborhood of Sopocachi. The most interesting thing about this park is its beautiful entrance with a semicircular arch gate made of carved stone. In the gate, which dates from 1770, you can see exquisite heraldic details. Inside the park there is an imposing fountain with the figure of the god Neptune flanked by two equine figures.

In La Paz there are several lodging options, from comfortable five-star hotels, to more modest accommodations and even low-cost road accommodations. Among the most recommended comfortable hotels is the Loki La Paz, which is a restored hostel and currently users place it as one of the best hotels in South America. Its architecture is impressive because it has a mixture of colonial and modernity, in addition, its rooms are spacious and comfortable, with good services including hot gas shower. Meals are also recommended. Another of the recommended ones, for its strategic location in the center of the city, is the Hotel Copacabana, whose rooms also provide a comfortable service since they have heating, cable television and private bathroom. The attention to the room is all day and the services of restaurants are well reputed among the users.

Video of the most impressive tourist places in La Paz